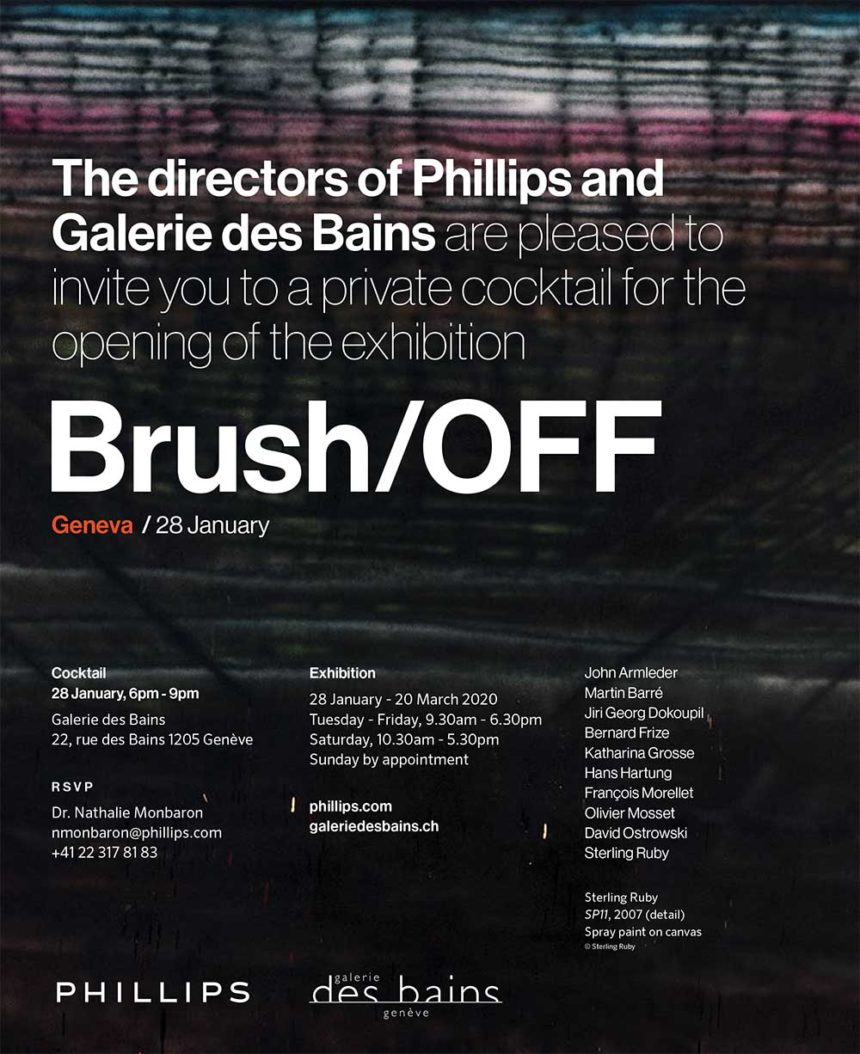 Brush/OFF is showcasing a selection of works which retrace the history of brushless painting from the 1960s to the present day. Artists included are Martin Barré, Sterling Ruby, Hans Hartung, Olivier Mosset, Katharina Grosse, Bernard Frize, François Morellet, John Armleder, David Ostrowski and Jiri Georg Dokoupil. Brush/OFF will open to the public from 28 January to 20 March 2020, in the Galerie des Bains, at 22 rue des Bains, in Geneva.

Brush/OFF focuses on the period after ‘Post-painterly abstraction’ (a term coined by Clement Greenberg during an exhibition at LACMA in 1964). This period welcomed a new generation of brush-less painting which used unconventional materials such as spray painting. Brush/OFF starts with a series of decisive works executed by Martin Barré between 1963 and 1967, commonly known as “bombages” (in this series there exist around 70 paintings). The “bombages” are central to Barré’s oeuvre, whose first Swiss retrospective is currently on show at MAMCO in Geneva, soon to be followed by a major exhibition scheduled to take place at the Centre Pompidou in September 2020.

In 1963, Martin Barré put down the brush and picked up the aerosol can: a resolutely revolutionary gesture on behalf of the artist and one which would go on to affect many of his contemporaries. From the 1960s onwards, the emergence of different forms of brush-less painting began to become integral to the contemporary artists’ toolkit andmodern artists began to experiment with alternative pictorial techniques such as spray paint, splattering, pouring and scraping. Martin Barré’s series of “bombages”, completed at such a pivotal moment, thus reflects this shift in the history of twentieth century painting, which would go on to inspire generations of artists.

Further artists to feature in Brush/OFF include Hans Hartung. Handicapped as a result of a war injury, Hartung began to explore alternative painting techniques in the 1960s. Also in the show is featured Katharina Grosse who experiments with ambitious canvases sprayed with colour pigments. In the series of “pour” and “puddle paintings”, John Armelder blends paints and solvents directly onto the canvas. Through geometric shapes filled or misted with monochrome spray, Olivier Mosset creates large scale canvases with political connotations. For Sterling Ruby, the use of spray paint is a direct reference to the graffiti and street gangs of Los Angeles. David Ostrowski delves deep to find a primitive and spontaneous aesthetic, presented in acrylic and lacquer on canvas or wood. Bernard Frize uses classical colours whilst playing with application tools such as spray paint. François Morellet’s work resembles Bernard Frize in establishing strict linear rules that dictate the form of his compositions.

Brush/OFF pays homage to the renewal of the pictorial genre through the abandonment of traditional painting.

ABOUT PHILLIPS
Phillips is a leading global platform for buying and selling 20th and 21st century art and design. With dedicated expertise in the areas of 20th Century and Contemporary Art, Design, Photographs, Editions, Watches, and Jewelry, Phillips offers professional services and advice on all aspects of collecting. Auctions and exhibitions are held at salerooms in New York, London, Geneva, and Hong Kong, while clients are further served through representative offices based throughout Europe, the United States and Asia. Phillips also offers an online auction platform accessible anywhere in the world.  In addition to providing selling and buying opportunities through auction, Phillips brokers private sales and offers assistance with appraisals, valuations, and other financial services.